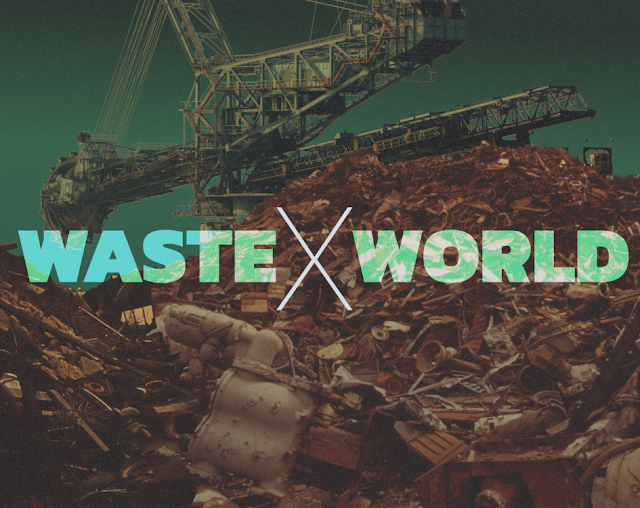 YO! I made something new!

It's called "WASTExWORLD". It's a sci-fi micro setting for running games on a trash planet. It's system agnostic and pretty straightforward. I'm really happy with how it turned out. Go get it right away from itch.io.

I've wanted to put out something small and DD/HS adjacent for a while now. I started work on another, more fleshed out adventure (about winning the lottery in space), but the pandemic has unfortunately put play-testing on hold - which is why there's been little in the way of DD/HS progress. That's where wasteXworld comes in. I wanted to limit myself to only a couple of pages, some short writings, and some tables. That scope creeped to include a map and a gazetteer, which I'm glad I added as I feel it fleshes out the details into a more finished product. Ultimately I wanted to make something that needed very little play testing and that could show off my evolving layout chops.

Nothing exists in a vacuum however, and I was inspired by Lone Archivist, YOU GOT A JOB ON THE GARBAGE BARGE, and that one Clone Wars episode where they find Maul on the garbage planet. I'm considering writing a full blog post about the design process for this PDF.

While this project has actually seen the light of day, I have at least 3 more on the back burner. Not to mention an update to DD/HS that has been waiting for about 6 months now. The main thing keeping me from finishing those up is time, so they'll be done when I get them done. Hopefully this release gives me a bit more motivation to work on them, as I was starting to feel overwhelmed by their scale. Also, be sure to expect more of this sort of small thing. I'll probably end up starting another one soon if WASTExWORLD does well numbers wise.

If you've read this far, thanks for your support! I know things have been quite for the past year, but seeing people interested in the stuff I make is a major motivator. If you want to keep the games flowing, make sure to follow me on itch over at daniel-harris.itch.io

Popular posts from this blog

A Quick Method of Character Linking

January 03, 2021
I do not like cold starts. Opening in a tavern or what else kills the believability for me. It also lacks any hook for why the party should be working together instead of apart. To alleviate this I exclusively have some sort of starting condition. Most recently a caravan of refugees traveling across expansive, empty steppes. This is better than starting out nowhere but I still think there should be some glue to bind the party before they set out on adventure. To accomplish this, I've devised a method of quickly "linking" characters together, and then actually putting that to good use by making the players actually think. So here is my session zero character linking rules: Every character will roll a die. Which die is dependent on how many players you have and what the starting conditions are. A a larger die (such as a d10) will result in less relationships, while a smaller die (such as a d4) will result in many more relationships. A d8 tends to work well. In small groups,
2 comments
Read more

An Argument Against Spell Lists

January 21, 2021
On the shelf beside me sits a variety of books detailing wizard spells. From my humble 1984 copy of "The Complete Wizard's Handbook" to my special edition "Dungeon Crawl Classics", they are all packed full of spell lists and detailed descriptions of the magical effects. They are absolutely wonderful. I think it's time to do away with them. Modern D&D has, over the years, tried to undo the power curve of wizard. There is no quadratic wizard in 5e (in part because they are less powerful and fighters are more powerful). Now wizards get cantrips and their most powerful spell (wish) comes with a host of restrictions. Wish being restricted so much is pretty egregious, but I digress; wizards are now "balanced". Zzarchov Kowolski does a great job of summarizing the origin of this imbalance, in his blog post Everything you think about Game Mastering is probably wrong: Part VI Assumptions about game play , Kowolski points out that we've only assumed
Post a Comment
Read more

April 11, 2020
Let me begin by saying thank you to all of you who have taken the time to read the posts prior to this one about Drier Deserts, Hotter Suns, as well as all of you who have taken the time to read the early version of the game. So before I get into rambling, I would like to announce that DD/HS is now available to all on itch.io, I'm so very excited to get this game onto people's tables. So please, reach out if you haven't already if you have any thoughts on the game. Drier Deserts, Hotter Suns (Playtest Rules) by Daniel Harris   This is part 3 of a series detailing Drier Deserts, Hotter Suns, a space western rpg. Click here for part 2 This game has gone through a lot. Having always been a fan of Star Wars and Sci-fi in general, I've always yearned for a RPG system about flying fast spaceships. I'm sure there are many, but during my brief anime phase in high-school, Cowboy Bebop become the catylist that finally convinced me, an already new TRPG fan, to write a
1 comment
Read more